Why did the local art gallery start displaying fleshy sculptures? Who is the stitch-faced lady that lives in the cave down by the beach? Why do people avoid the lighthouse?Discover and solve these sinister cases as the world begins to bubble and boil. Something beyond reason is out there and if the players aren’t careful it might notice their meddling in its plans.

The intrinsic Pool and Eyescape system ensure the horror rapidly increases as the player’s succeed in meddling in forces beyond their understanding, success that could mean their end as the Eyes begin to open.

In order to download this ttrpg you must purchase it at or above the minimum price of $11 USD. You will get access to the following files:

This is a fantastic little game. Easy to understand. The rules are incredibly evocative, the art and presentation is cool, and it feels easy to hack and adjust. It is dripping with flavor for helping you build a very lightweight and easy to run adventure for exploring horrible dark secrets lurking in a quiet town.

Only complaint is technical, 250mb is gargantuan for a 36 page pdf and it lacks bookmarks or other features. Hardly a reason not to buy the game though, because the system is very cool.

Thank you for the kind words. Feel free to create and post/sell any hacks you want, I need to add a creative commons license but rest assured its there.

I am a Japanese RPG player.

I wonder what your game "CHOROGAIDEN" means in Japanese. I think "Gaiden" means "sub episode", but what does "CHORO" mean?

This is just a question of interest. We will play this game soon. I look forward to doing it.

I look forward to hearing about your game.

Choro is 長老 Elder. But it is a play on the lovecraftian concept of Eldritch or Elder God which relates to The Eyes within the game. Hope this clears it up!

Thanks a lot for your reply!

Hi! I read over the PDF in one sitting because it really grabbed me. This game is just dripping with style and I can't wait to run it. However, I noticed that the Gumshoe and the Reporter character cards have two abilities the same, with the text on the Gumshoe abilities still saying "Reporter"
Not sure if they were intended to have the same abilities or not, but I thought I'd point it out.

Oof good catch thank you, I'm putting out a patch now with a few changes. Thank you for the kind words as well!

Chorogaiden is a low-fidelity occult horror ttrpg in the vein of stuff like World Of Horror.

The PDF is 36 pages, with a sludgy, consistent aesthetic, and everything is easy to decipher.

Setting-wise, Chorogaiden takes place in a small town in Japan. The world has a slightly gothic, slightly weird vibe, and the overall atmosphere is that most people have probably had a brush with something horrible, but few people talk about it.

Gameplay-wise, the players work with the GM to flesh out their town, and then work against the GM to close a Gate inside the town. The Gate is an opening through which a force called the Eyes sends monsters and horrors. As the Eyes sends them, the Gate slowly opens, and when it opens fully the world ends.

For rolls, players spend d12s from a pool and use the sum of their spent d12s + a relevant Skill against a target number. If they beat the TN, they get back one spent d12---encouraging players to either risk failure or open up with big permanent spends on rolls that matter. At the same time, when any of their rolled dice match numbers from a set generated by the GM, the game advances towards a lose condition. This sort of puts an onus on the GM not to call for frivolous rolls and also to make the results of all rolls meaningful---but I'm not sure if the book is quite emphatic enough about communicating this.

Combat in Chorogaiden is handled through regular rolls, and doesn't play out granularly. If there's an axe-wielding maniac in town, you can choose to go after them and make a roll, or you can choose to do something else and roll for that instead. And if you do something else, the axe-wielding maniac will take their own actions in the meantime. Essentially, you're not going to be moving around a little tile grid and using abilities---the feeling is more like a series of skirmishes, or of playing cat-and-mouse.

Because the game's theme is investigations, and because investigations in rpgs have a tendency to brick if the players and the scenario writer aren't on the same wavelength, Chorogaiden does have a mechanic for players getting hints from the GM. By spending a d12 and advancing the game towards its lose condition, any player can get a randomly generated insight. These insights aren't scenario-specific, but they're worded in such a way that they will usually help unstick the players no matter the circumstances.

Character creation is Class based, with Classes and skill cards that loosely mirror World Of Horror's system. Skills generally influence the core rolling mechanic, as there aren't damage/hp/mp/items the way there would be in WoH, but everything fits the scope and themes of the game.

For GM utilities, there's a list of sample adventures (some of them beat-for-beat World Of Horror investigations, although I think that's because they're both pulling from the same Junji Ito material.) There's also advice throughout, but the game leans on the GM a lot to substantiate plots, to come up with the endgame, and to improvise antagonists and consequences. If you like to freewheel and design on the fly as a GM, you'll enjoy this style a lot, but conversely if you hate those things you'll struggle hard here.

Overall, Chorogaiden is a game with a strong atmosphere, great art, and a sort of loose framework. A lot of what you get out of it will depend on what the GM puts into it. If you're a fan of occult horror games, Junji Ito, or maybe even the PC-98, I'd recommend giving this a look.

-Page 13, if a player helps another player on a roll and the rolling player fails, does the helping player get back their d12? A strict reading of the rules suggests no, but it does seem to be implied.

-Page 17, the text mentions increasing the IF. IF isn't explained until the next page. 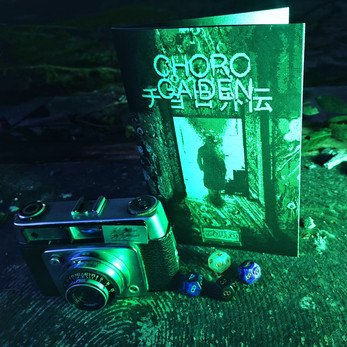 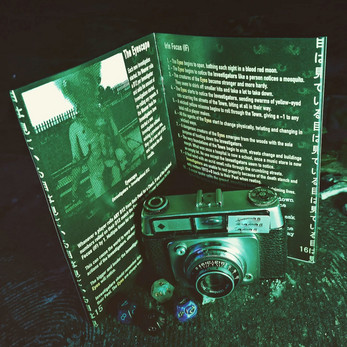 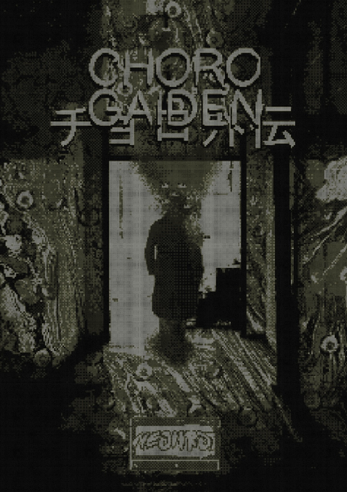 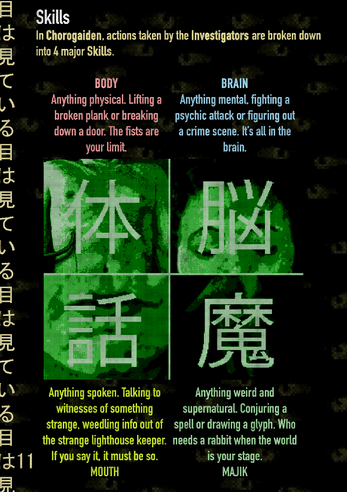 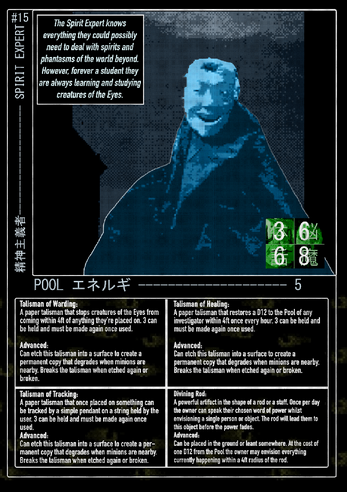 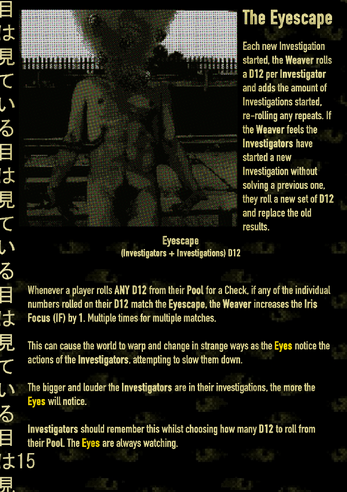 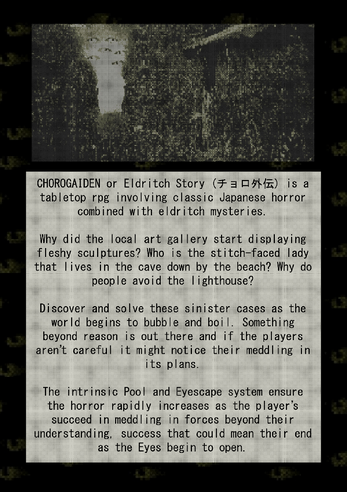